Our time in Greece started out great, foodwise. We spent our first week in Athens where we had rented an apartment through AirBnB. It turned out to be in the vicinity of some delicious food. Within the first couple of days we were welcomed into shops and restaurants where we sampled some amazing (and affordable) Greek cuisine.

One of our most memorable meals was at a restaurant near the apartment. They started us off with a shot of raki before a meal of apaki (a seasoned and smoked lean pork dish) and kokoretsi (intestines wrapped around offal and grilled). Both were incredibly delicious. We ended the meal with a complimentary portokalopita (a dense yogurt cake soaked in orange syrup).

On our way back to the rental we stopped into a bakery for some Greek coffee and sweets. In addition to our selections, the employee there sent us on our way with a bag full of koulourakia (cinnamon and red wine cookies) just because. We were loving Greece and its foods. Little did we know these wonderful few days would spoil us for the rest of our time in the country. 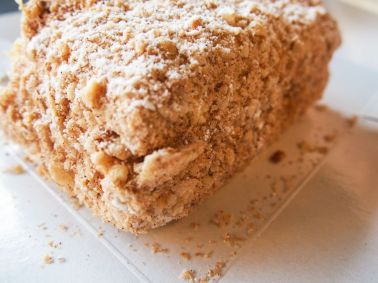 In Athens we also tried kontosouvli (pork chunks slow roasted on a rotisserie) on a whim. The meat practically melted in your mouth. I had the best Greek salad I would have during our entire stay while in the capital city, and we discovered spetsofai (sausage grilled with vegetables). Greek food was amazing, but then we left Athens.

Our next stop was Delphi, where we first encountered gigandes plaki (giant beans stewed in a spiced tomato sauce). It would become Patrick’s favorite dish, but we wouldn’t find one quite as good as the first again for we had begun to move into the more touristy areas.

As we headed on to Olympia, Santorini, and Rhodes the cost of food grew higher and higher while the quality lessened. We never again found portokalpita, though I tried desperately. There were no more welcoming restaurant owners offering raki or desserts. We were now just one more tourist – in one day and gone the next. Our tip for any travelers looking to get cheaper and often better food is to move away from the touristy areas. Look at the biggest attraction then turn around and walk in the opposite direction. Even a block or two can make a big difference. Unfortunately, in Santorini there wasn’t really anywhere else to go. It’s a small island that is, in itself, an attraction. So Santorini was ridiculously expensive, but we tried to make the best of it.

Since it is an island we decided to sample some seafood. The fish was disappointing, and the octopus, while good, was so expensive that it wasn’t even worth ordering. By the end of our stay we were subsisting on gyros (which always seemed cost around 2.50 Euro no matter where we went), tiropitakia (feta cheese pies), iced capuccinos, and Loux Lemonada (a sparkling lemonade that is my latest addiction). 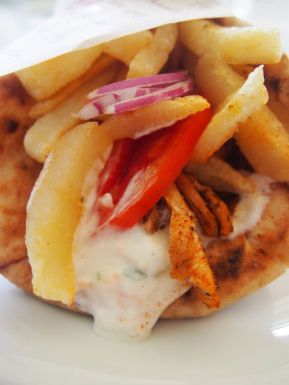 Overall, food in Greece was hit and miss. Sometimes it was amazing, especially the meats. Other times it was overpriced and disappointing. A few times it was even covered in a surprise mustard sauce, which is a no go for Patrick. At least the Loux was always refreshing.