France takes its food seriously, and who can blame them? The country is famous for its exquisitely crafted food. From delightfully flaky croissants to the stinkiest of cheeses to snails dripping with butter and garlic. The French dominance of the culinary arts is due, in part, to the strict restrictions and detailed steps that go into each product.

France has a government bureau, the Institut national de l’origine et de la qualité, specifically for ensuring that French cheese, wine, and a whole slew of other agricultural products are made according to the strictest set of rules. Look up a recipe for croissants and you will find that it is a three day process. Even baguettes can only be made with yeast, flour, eggs, and water and must weigh 250 grams. France works hard to make sure they have the best food. We were fortunate enough to try a little, but we barely scratched the surface of French cuisine.

Escargot and steak tartare are two of the foods we were very much looking forward to trying, and try them we did. Eating snails and raw meat sounds a little bit gross, I know, but if anyone can make them taste good it’s the French. Escargot, it turns out, tastes mostly like butter and garlic. And, really, who can complain about that? The steak tartare we had was, unfortunately, a little disappointing. We had always pictured steak tartare as sliced strips or chunks of raw steak. In reality what was served to us was ground steak. It was essentially a hamburger patty that hadn’t been prepared yet. It was even served with the ingredients for making a hamburger patty (raw egg, salt, pepper, etc.). The raw horse meat we tried in Italy turned out to be much better (sorry France).

Next on our list of things to try were pastries and desserts. France did not disappoint in this arena. I have never liked macaroons until I ate them in France. Where other macaroons I’ve tried have been heavy and overly sweet, the macaroons in France were delicate with the perfect balance of flavors. The croissants were also better than anywhere else, full of light, buttery layers. Every dessert we tried looked and tasted like a work of art, but where France really shone was in the every day. 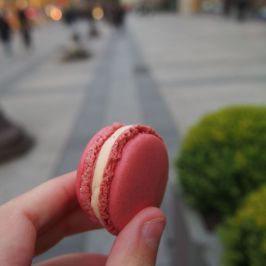 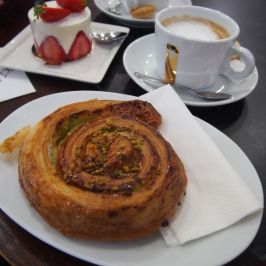 Little every day foods were just generally better in France. Apple juice was better. Cheese was better. Sausage was better. Soup was better. Bread was better. France may be famous for their fine dining, but our recommendation is to go to the grocery store. Buy yourself a picnic. You won’t regret it.