A Walk Through Paris

Poets and writers have been rhapsodizing about Paris for decades. It is the city of light, the city of love. Wandering the streets we couldn’t help but be impressed by the beauty of the city – the Eiffel Tower’s wrought iron curly-ques, Notre Dame’s elegant buttresses, the perfectly-sculpted French delicacies. The Disney Store on the Champ d’Elysees was the most impressive Disney store we have set foot in, and even the Abercrombie and Fitch had elegant, gold-plated gates.  Often we would find ourselves wondering out loud what this or that remarkably beautiful building was only to discover that it something as mundane as an office building. 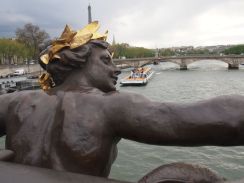 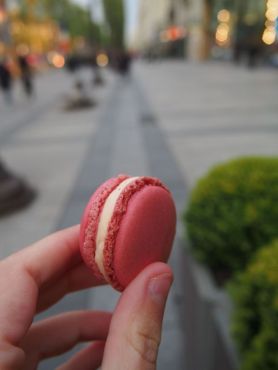 Outside the city center there are still beautiful places to explore in Paris. We were fortunate enough to be shown around the Faubourg Saint Antoine neighborhood of Paris by a local resident. Dominique is a volunteer with the Global Greeter Network, a network of people who really just want to show you around their city. Dominique has been living in this neighborhood for most of her life. When she was a child, she told us, the streets were filled with ateliers, or small workshops. The local craftsmen here made hand-made custom goods, mostly furniture. Today, many of these shops are gone, but a few still exist in the winding alleyways of this Paris neighborhood. On a cold, grey morning in April, Dominique showed us a few of these shops.

We walked into one shop where custom decorative leather was being prepared. We watched for a few moments as leather was embossed and painted before our eyes. Dominique pointed out the process by which a leather chair would be created. Our next stop was a visit to some seamstresses. The small shop, stuffed to the gills with giant swatches of fabric and dominated by two large tables, was a welcome reprieve from the cold weather outside. Dominique chatted with the two employees about their families, and translated for us information about the project they were working on. The massive orange velvet curtains they were carefully pleating and hemming would eventually hang in the Louvre café.

After visiting the ateliers, Dominique led us on a stroll through a local market and along a promenade that had been created in along the path of an old railroad, pointing out some historic residences along the way. She ended by giving us a list of the best places in Paris to get a view of the city, a real insider’s guide to Paris.

The weather may have been gloomy, but this little tour was an interesting introduction to a side of Paris we otherwise would not have seen. If your goal is to see a more local perspective of the city you’re visiting, then the Global Greeter Network is a great option. There are greeters in many major cities throughout the world. It does take some planning, though. Most cities ask that you request a walk two weeks in advance of your visit, and as it is all volunteer-based there may not be anyone available at the time you want. Even so, I think it is fantastic that there are so many people around the world who are so eager to show off their city to visitors like us.