Foods of Jordan, Israel, and Egypt

Overall, the Middle East is not taking the prize of the best food we’ve tried on our trip. We did, however, get to try some new and interesting foods on our visit to Jordan, Israel, and Egypt.

Shawarma quickly became our go to meal in Jordan. Mostly because it is cheap and delicious. For those of you who haven’t had shawarma before, it is meat that is squished onto a vertical skewer then cooked on a rotisserie all day. When you order, they will shave off a bit of the meat and serve it either on a plate with sides or in a wrap. In Jordan we ended up eating them in a wrap most of the time, served with cheese and pickles. Yes, Patrick ate something that had pickles on it. It was a miracle. We found that in Israel shawarma was prepared differently. The wraps usually did not have cheese or pickles. Instead, there were a variety of vegetables you could choose to add, and usually hummus or tahini. It was also more expensive in Israel so we stopped eating it, instead opting for falafel and hummus.

Falafel is a ball of mushed chickpeas and vegetables that has been fried. Usually, they are served in a pita with vegetables and hummus, but you can also order it as a stand-alone dish. I liked falafel; Patrick did not.

Hummus was the staple food of our trip to Israel. Food prices in Israel are not cheap. They are, in fact, on par with American prices. So for most of our time there we would just go to the grocery store and buy a tub of hummus and a bag of pita bread. That got us through many a meal. I’m sure that by this point most people in America know what hummus is, but in case you don’t it is a blended mixture of chickpeas, oil, lemon juice, tahini, and some spices. You serve it as a dip for pita bread, falafel, or vegetables.

Mansaf is a traditional Jordanian dish. In fact, it is the national dish of Jordan. You probably won’t find it in Israel, but every person you speak to in Jordan will tell you to try some mansaf. It is an interesting dish worth trying once. It starts with a bed of rice. On top of the rice is lamb that has been cooked in fermented yogurt garnished with slivered almonds and pine nuts. The whole mess is then covered with fermented yogurt sauce. It’s not bad, but I wouldn’t describe it as good either.

Koshari (also spelled koshery or kushari) is basically the Egyptian version of goulash. This is one of those dishes that feels like it was invented by just combining everything that was left in the kitchen cabinets, and it works out well. It’s made with a combination of pasta, lentils, chickpeas, rice, and fried onions. It’s served with a tomato-based sauce and a hot sauce that you just dump on top and stir around to your liking. You can also add a bit of garlic and lemon juice for authenticity. 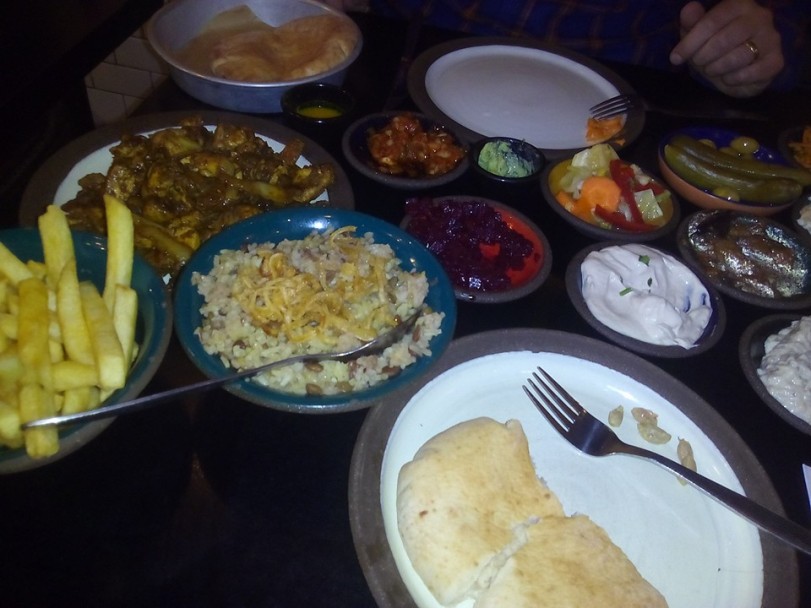 As the name suggests, the Jerusalem mixed grill is a Jerusalem specialty. Also as the name suggests, it’s really just a mix of various meats. The mix includes chicken livers, spleens, and hearts along with bits of lamb. All of the meats are seasoned and grilled together then served in one big pile. The dish is said to be invented at the Mehune Yehuda market in Jerusalem, and several steakhouses in that area claim to be the original. We tried it at Hatzot’s, and it was pretty delicious.