Happy New Year From Down Under

G’day mate! Nikki and I are in the land down under just in time for the new year! In case you weren’t aware, New Year’s Eve (NYE) is kind of a big deal in Sydney (SydNYE), and they do an impressive job of distributing information about their huge celebration. There are numerous kiosks downtown staffed by cheerful people eager to inform you about the best places from which to view the fireworks. They also have a slick website and app that even update how close to capacity each vantage point is. Oh, and their event port-a-pottys are marvelous: flushable with attendants constantly cleaning and re-stocking. However, getting back to our rental afterwards was quite an adventure (more on that later).

With all of that information, we felt prepared when we woke bright and early on the 31st and procured provisions at a nearby grocer. With bags in hand we boarded a ferry to Cremorne Point, from which we would have an expansive view of the harbor under the fireworks. A crowd had already gathered when we arrived at 10AM, but we were able to secure a prime spot on the edge of the water with some shade. Getting a shady spot was perhaps the wisest move we made. We had forgotten to bring sunscreen. Bottles were for sale at the harbor for $20 to $30, but seeing as how we are on a tight budget we decided to risk the skin cancer. I’m proud to report that we have minimal burning – an impressive feat considering we were in the sun for nearly 14 hours straight.

By the time the sun dipped low and the first evening show began we were exhausted, hungry, and a bit cranky. Was the wait worth it? YES! The fireworks were truly epic, which is to be expected when a city spends $7 million on a show that lasts less than 30 minutes. It was by far the largest display of fireworks we had ever seen. The city shoots off the fireworks from four different locations spanning the harbor so you are bombarded from all sides. It was spectacular. 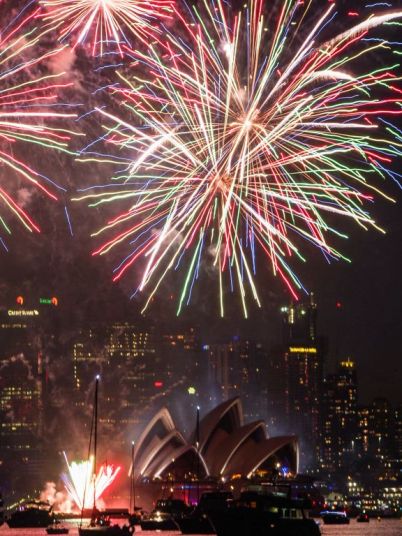 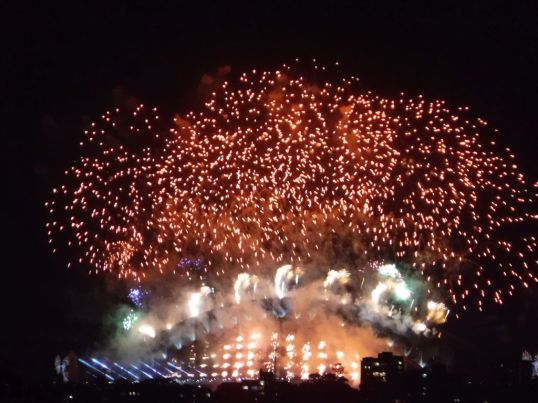 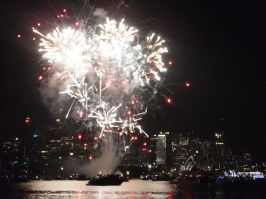 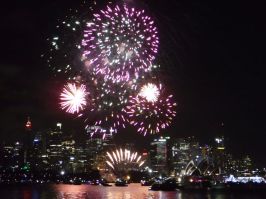 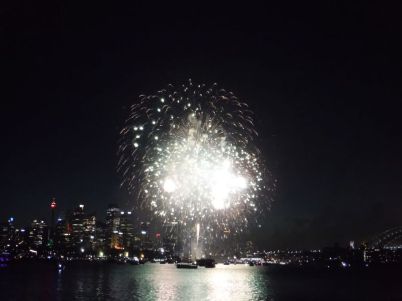 After the finale, which practically made the night turn to day, we and our fellow revelers headed back to the loading dock for the scheduled 1:00AM ferry. At 1:30AM a police officer announced that there would be no ferry. No explanation. No further directions. Just no ferry. A herd of people turned to head the other direction. A man in front of us stopped to ask how to get back to downtown, and the police officer curtly told him to hike up to the main street and catch a bus. We weren’t familiar with the buses, and we don’t have working phones here so we simply followed the crowd and hoped that someone knew where they were going. We weren’t the only ones in this odd situation either.

Sydney, especially at NYE, is the most culturally diverse city we have visited. People from all over the world had come to celebrate NYE here, and they too had no knowledge of the buses. Together, we formed a river of lost and anxious people flowing through the streets of Sydney on the first day of 2016. After an hour of walking we found a bus stop. We, and hundreds of other confused souls, flooded the buses. Three buses filled up before we were able to get on one. The overwhelmed and irate bus driver informed everyone getting on that the harbor bridge was closed, as if that would dissuade us from boarding. He did inform us that we could catch a train at North Sydney Station, where his bus was headed. Okay, not so bad; we were tired and cranky, but we understand the trains a bit and there are helpful maps at the stations.

The “helpful” driver let us all off a 10 minute walk away from the train station. When we finally fumbled our way to the station the entrance was closed off, and a large crowd had formed, herded by a remarkably large police presence. You know those movies when an area is quarantined and the military is holding back the crowd at the fence? That is what this felt like. We honestly began to wonder if there had been a terrorist attack, or at least a threat, except that everyone around us had handheld internet capabilities and didn’t seem to be alarmed.

After waiting another 30 minutes we were finally able to enter the train station and head back to our rental. At the beginning of the day we had hoped to be back and in bed by 2:30AM so we could get a little sleep before exploring Sydney the next day. At 4AM I unlocked our door and we collapsed into bed. At least we got that head start on 2016 compared to our friends and family back home.

3 thoughts on “Happy New Year From Down Under”