We like to eat. One of the most anticipated aspects of our trip was all of the delicious food that we would get to experience. We are happy to report that Hawaii did not disappoint. Here is some of the local cuisine that we sampled and (mostly) enjoyed. 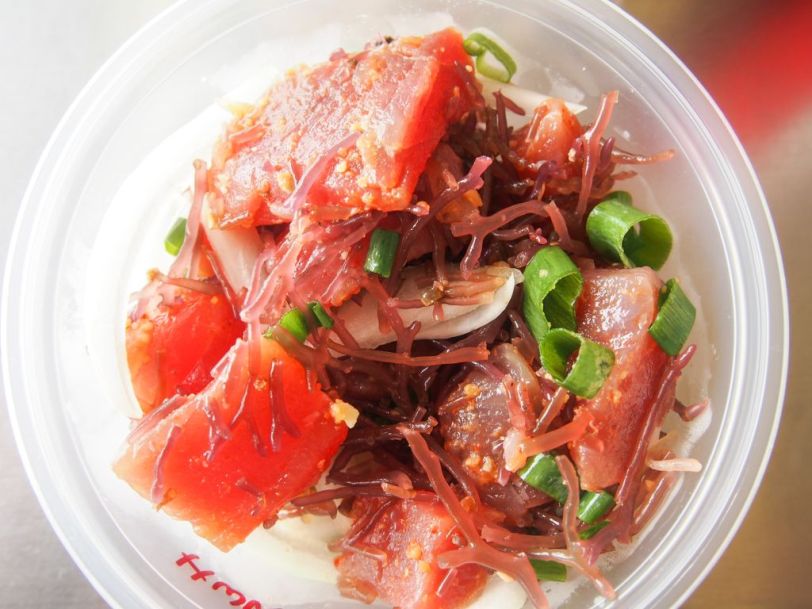 Poke (rhymes with okay) is essentially a raw fish salad. Some restaurants do serve it, but your best bet is just to head to the local supermarket. The seafood department of every supermarket we have been to offers a variety of poke. The one pictured here came from Waianae Market in Waianae, Hawaii. There are several variations, but it is basically raw tuna tossed with some combination of soy sauce, sea salt, sesame oil, chili pepper, onions, fish eggs, and seaweed. 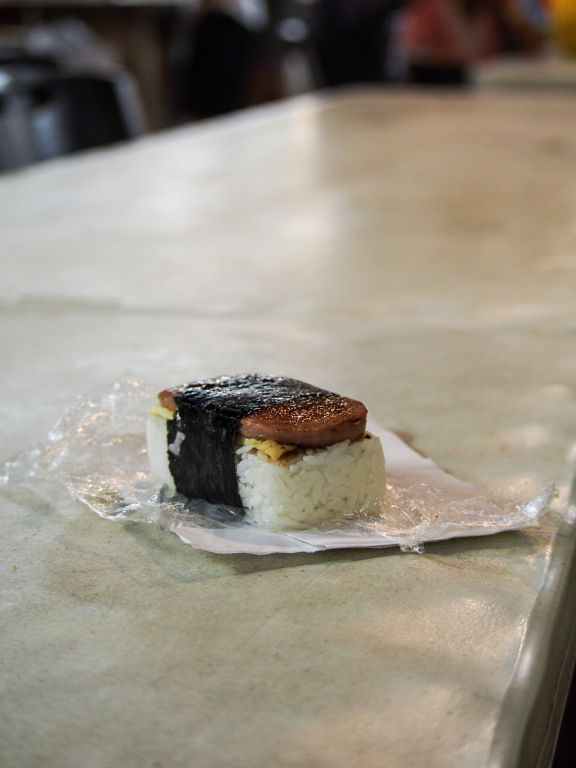 Hawaii’s favorite snack food, musubi is simply a slice of Spam on top of a block of rice with a piece of seaweed wrapped around it. You can find it basically anywhere: farmer’s markets, gas stations, grocery stores, food vendors. We bought this particular one in Chinatown, and it had some sort of egg thing on it too. There are other variations of musubi that have katsu or teriyaki. They typically cost about $1.50 each, and are a great little snack. I’d recommend pairing with Pepsi and malt liquor. That’s how they seem to do it in Makaha. 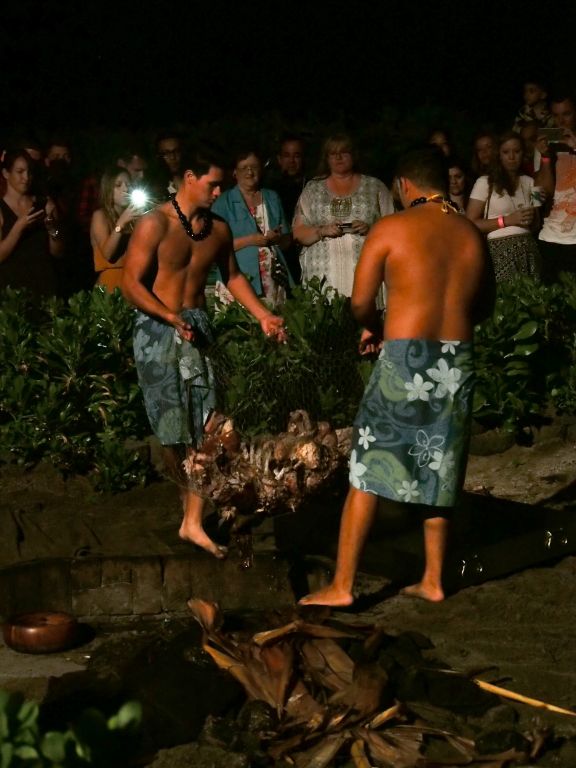 Kalua Pig is traditionally cooked on hot coals in a pit in the ground.  Many restaurants have kalua pig on the menu, but I’d recommend going to a luau. That way you’ll get a chance to actually see the pig being pulled out of the pit. Plus, I’m pretty sure the meat tastes better after watching bronzed Hawaiian men pull it out of the ground. The meat comes out like a moist, delicious pulled pork. We went to Germaine’s Luau in Kapolei on Oahu. Don’t buy tickets directly, though, unless you just like spending all your money. There are several discount tickets available through tour operators in Waikiki. We bought ours through Living Social. 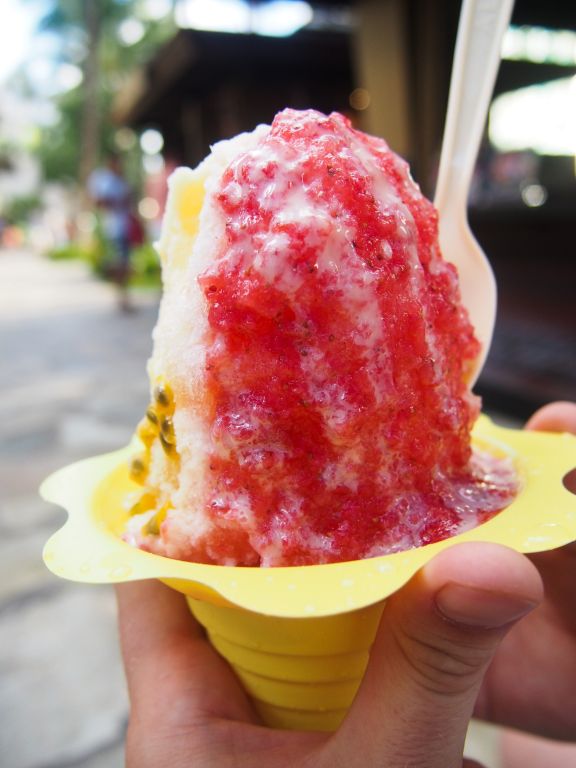 You’ll be able to find a shaved ice stand basically anywhere that people might be walking around in Hawaii. It’s kind of like a snow cone, but so much better. The ice is shaved much thinner (it actually is like snow) then your choice of flavored syrup is generously poured on top if it. You can also add ice cream, froyo, or sweetened condensed milk to make it creamier. We opted for lilikoi (passionfruit) and strawberry with sweetened condensed milk on top in this picture. I also tried a horchata flavored one the other day (because horchata tastes like Christmas to me), and it was awesome. 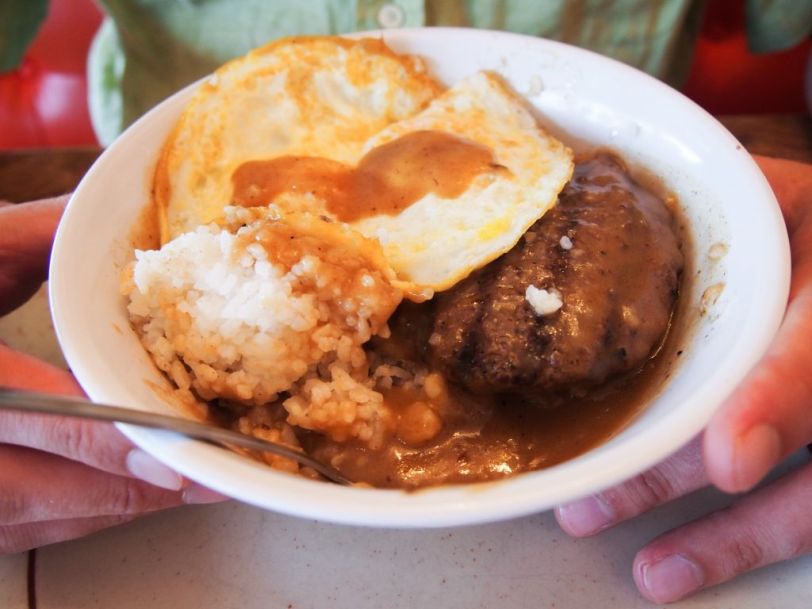 My family has a recipe that we call Ham Wiggle. It’s simple to make. You take some white country gravy, add a can of peas and some chopped ham, and serve it over toast. I’m not sure how it originated, but I imagine it was something along the lines of, “Hmm…what sort of cheap ingredients do we have in our cupboards that we can throw together?” Loco Moco has that same sort of feel. It is basically a couple scoops of rice with a Salisbury steak and brown gravy topped off with a  fried egg. Messy, cheap, and delicious. Look for it at cheap, quick service restaurants all over Hawaii. We tried this one at Ken’s House of Pancakes in Hilo, which is a great diner if you ever find yourself on the rainy side of the Big Island. 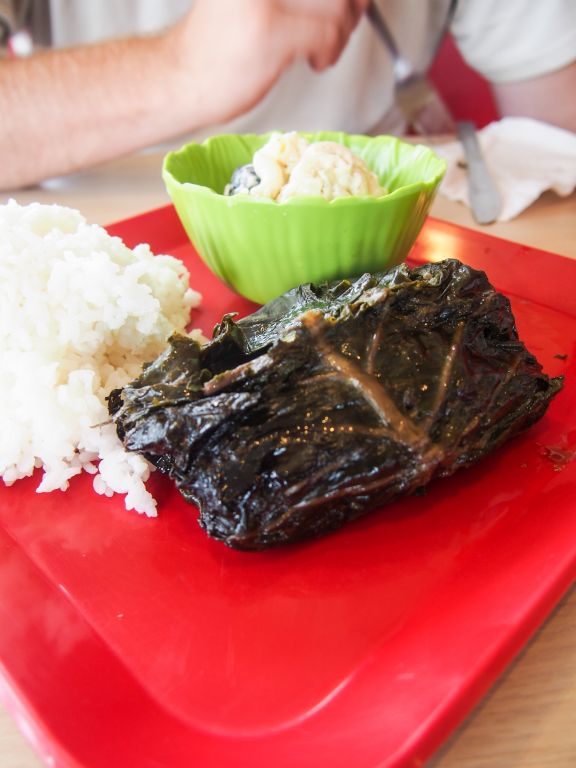 Laulau is prepared by wrapping meat (usually chicken or pork) in a taro leaf and steaming it. The meat comes out very moist with a bit of the flavor from the taro leaf. It’s tasty. In my experience, it’s kind of hard to go wrong with food that’s been wrapped in a leaf. Laulau is usually served as part of a plate lunch (which just means that it comes with rice and macaroni salad). The one picture came from Aloha Lehua Café in Pahoa, but you can find laulau at pretty much any quick serve restaurant in Hawaii. If they offer plate lunches then laulau is probably on the menu. 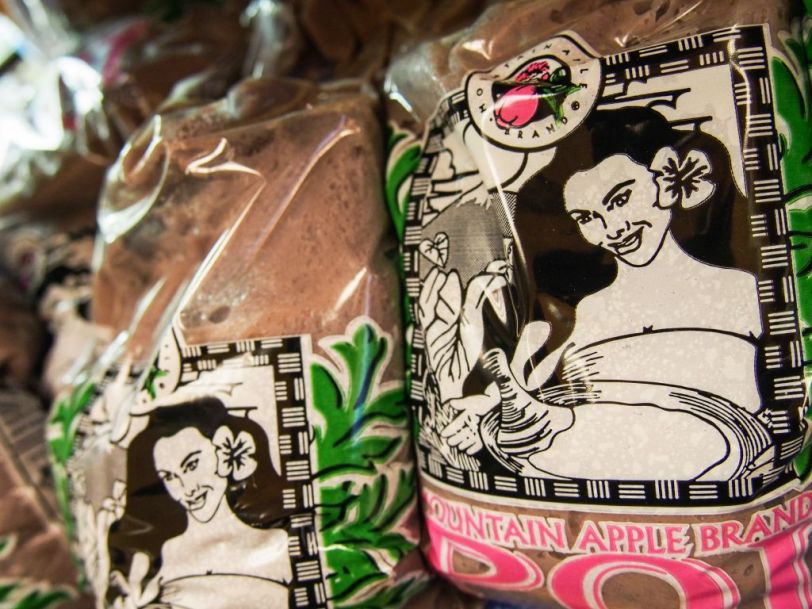 No article about Hawaiian food is complete without at least mentioning poi. It is a paste made from the root of the taro plant. Poi kind of tastes like nothing. At best I would compare it to watered down mashed potatoes, but it has been a staple of Hawaiian cuisine for as long as there has been such a thing as Hawaiian cuisine. In fact, in Hawaiian mythology the taro plant is the older brother of human beings. We care for it, and it provides sustenance. I just have to wonder why they settled on poi. I’ve tried taro in other forms, and it is quite good. Maybe that was just what they could do with what they had. If you go to a luau they will probably give you a little bit of poi, but you can also find it at any grocery store in Hawaii. 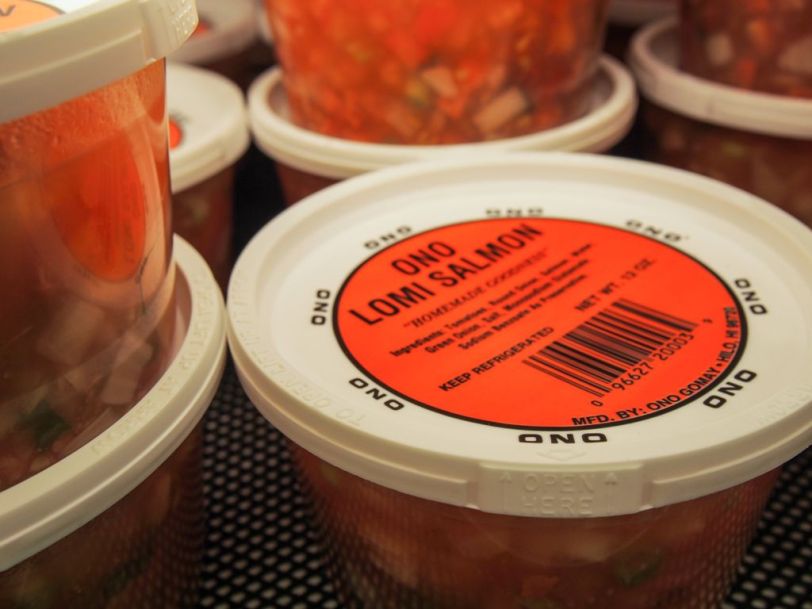 Imagine pico de gallo with salmon in it. That is exactly what lomi salmon is. I’m not sure how you are supposed to eat it. Most restaurants seem to just use it as a topping, as you would pico de gallo. Last week we had some Hawaiian nachos that were topped with lomi salmon. You can also buy it at the grocery store or, if you go to a luau, they will probably have some there.